Virginia picks its first loss of the season 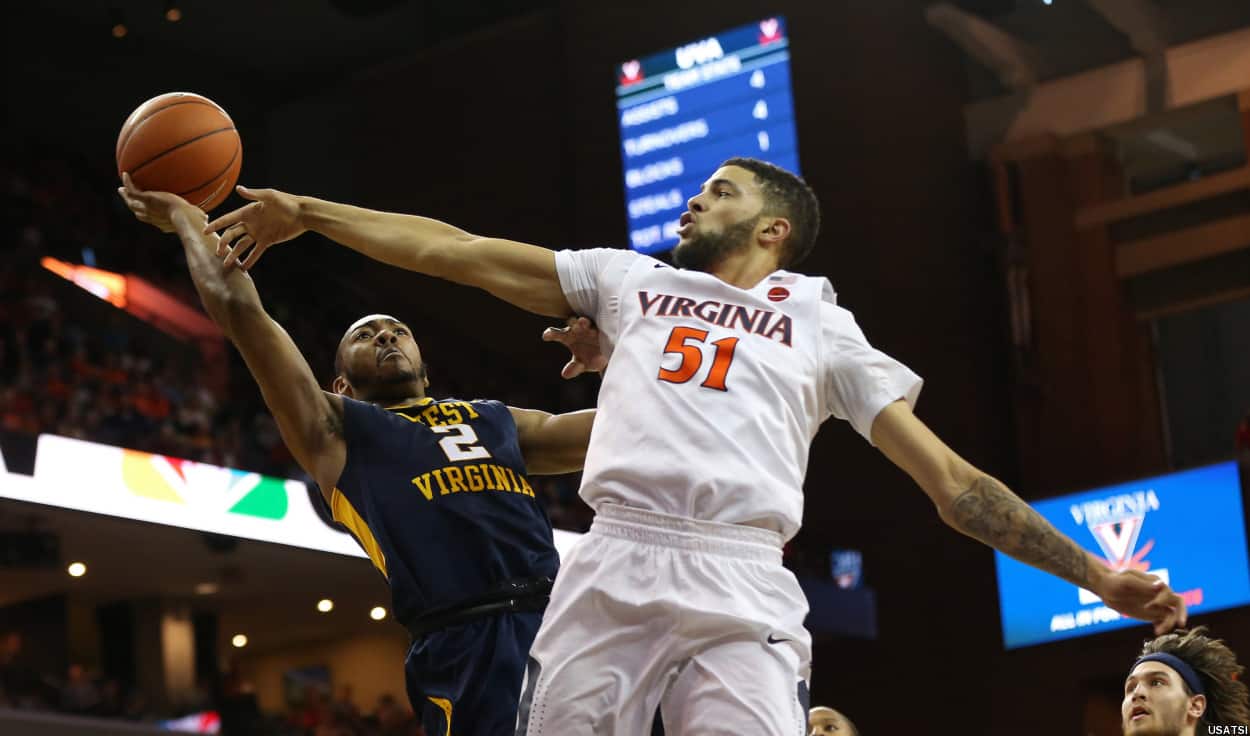 The first four weeks of college basketball made for a few surprising stories: it is now clear which teams consistently lived up to expectations and which failed to do so. There are only 11 teams with a still perfect record: Villanova (new #1 in the Ap ranking), Saint Mary’s, UCLA, Baylor, Gonzaga, Butler, Creighton, Notre Dame, South Carolina, USC, TCU.

UCLA surprisingly took the 2nd place in the ranking, first time since 2007, after a solid performance and a win on the road against Kentucky. Baylor (#4) had the most difficult schedule and is still on the rise, while TCU had a hot start under coach Jamie Dixon. South Carolina is now in trouble with the suspension of Sindarius Thornwell, the team’s top scorer. An unlucky event, since PJ Dozier was having a career year.

Here’s a recap of the week

Baylor‘s win over Xavier (76-61), third win against a top 10 team this season, carried the Bears to the 4th spot in the Ap Ranking. So far, they are the real outsider for the season, proving to be solid on both sides of the floor (top15 in Division I both in defensive and offensive efficiency) and mentally tough. Saturday’s game was the fourth comeback win, after those against VCU, Michigan State and Louisville. Baylor found itself down by 9 points, and then went on a 21-2 run in the second half, and the fans lit up the Ferrell Center. The protagonists of the game (and of this early part of the season), were Manu Lecomte, Jonathan Motley and Jo Lual-Acuil Jr.

Lecomte is a real floor general (and set his career high with 24 points against Xavier), tasked with running the offense and to make plays down the stretch. Motley is their only Nba prospect: a 6-10 forward with good athleticism and very active on defense, he has a good mid-range jumper to punish the opposing defense and is always close to a double-double (17 & 8 last Saturday). Lual-Acuil Jr., as of right now, is the best rim protector in the nation, and he finished the game with 6 blocks.

Xavier played a good first half, leading the game from the very beginning thanks to efficient  shooting overall and 5 threes, including 4 by Trevon Bluiett, who started the game on fire and finished with 23 points. After the brek, the Musketeers blacked out on offense (23% from behind the arc) and were killed by the two issues that have been plaguing them early on: turnovers and free throws. Xavier is averaging 14 turnovers per game, and coughed the ball up 17 times on Saturday, allowing 18 points off turnovers. The 2-3 zone drawn by coach Scott Drew proved to be effective against Xavier’s shooters, and forced their guards to attack the paint. The Bears regularly sent the Musketeers to the free throw line, where they shot 57%. The only good signs came from Edmon Sumner constant improvement (19 points), although he still has to work on his jumper and has to make better decisions with the ball in his hands. It was an awful night for J. P. Macura, the one player who can open the defense with his catch&shoot, who finished 2-of-16 from the field and 1-of-6 from three.

The battle of the two Viriginias

Virginia is one of the teams who picked its first loss this week, in a home game against West Virginia, in what could be called a clash of defensive philosophies. The Cavaliers are the best team in the nation in opponents points per game (47), the Mountaineers are the best team in the nation in opponents turnovers: 25 per game, down from the 30 turnovers per game they were causing before, although that number was influenced by the Manhattan‘s 40 turnovers. There is a huge difference in the two teams style: Virginia has a strong half court defense and is dead last in pace (less than 60 possession per game, per KenPom) and scores less than 70 points per game, while West Virginia takes advantage of a full court press, has a fast pace (74 possession per game) and scores a lot (90.4 points per game).

After a bad start that saw the Mountaineers fall to a -11, the team had to play catch-up to get back into the game. Daxter Miles‘ ejection (flagrant 2 for an elbow on Isaiah Wilkins), forced them to play without their best scorer of the night, but nothing really changed. Jevon Carter and his teammates played a suffocating defense on London Perrantes and forced him to his worst game of the season, although his only made three-pointer of the night got the lead back for his team. But in the last possessions of the game, it was their defense to let them down: the Cavaliers were late on a close out on an Esa Ahmad three-pointer, late to help on a Tarik Phillip penetration and the Mountaineers put up an 11-2 run that got them the lead for good.

Of the many games played among Texas Universities, there used to be one match-up that always went the same. Until last week. On their 12th attempt, UT Arlington finally won against Texas, for the first time in history, taking advantage of the troubles Shaka Smart‘s team is going through. It was depressing game for the Longhorns, especially in the second half, when Drew Charles (someone who is not likely to have a future career in basketball), nailed 4 consecutive shots from behind the arc and Texas’ defense never even blinked. The first half saw the two teams shoot a combined 4-of-29, which might have justified a relaxed approach to perimeter defense, but there was no reaction whatsoever during or after Charles’ flurry and the Longhorns lost their third consecutive game before getting a much needed win against Alabama. 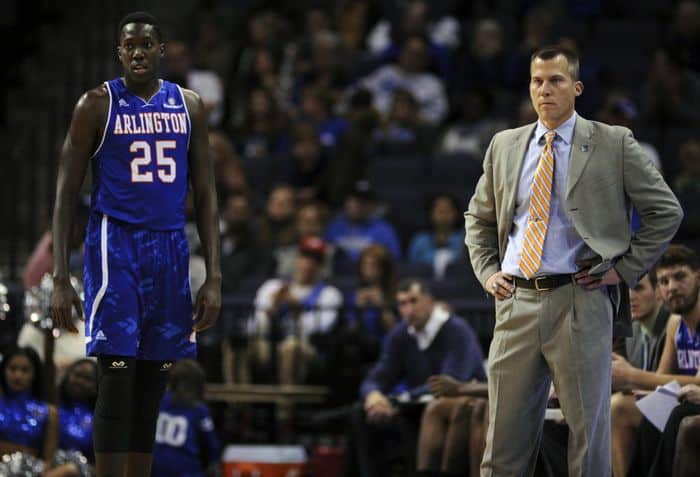 Kevin Hervey was critical for the Mavericks win. The junior forward lost most of last season due to injury, but he finished with 18 points and 10 rebounds and stopped Texas attempts to mount a comeback, together with Jorge Bilbao, one of the least known Spaniards in the Ncaa.

USC (8-0) started the game 1-of-17 in the first 7 minutes, but then shot 14-22 in the following 13 minutes, reached the half with a 7-point lead and went on to win the game against Brigham Young. The Trojans are now close to crack the top 25 despite missing forward Bennie Boatright, who is out with a knee injury until the end of the year. The team’s backcourt proved to be very reliable, led by Jordan McLaughlin, who scored 24 against BYU. 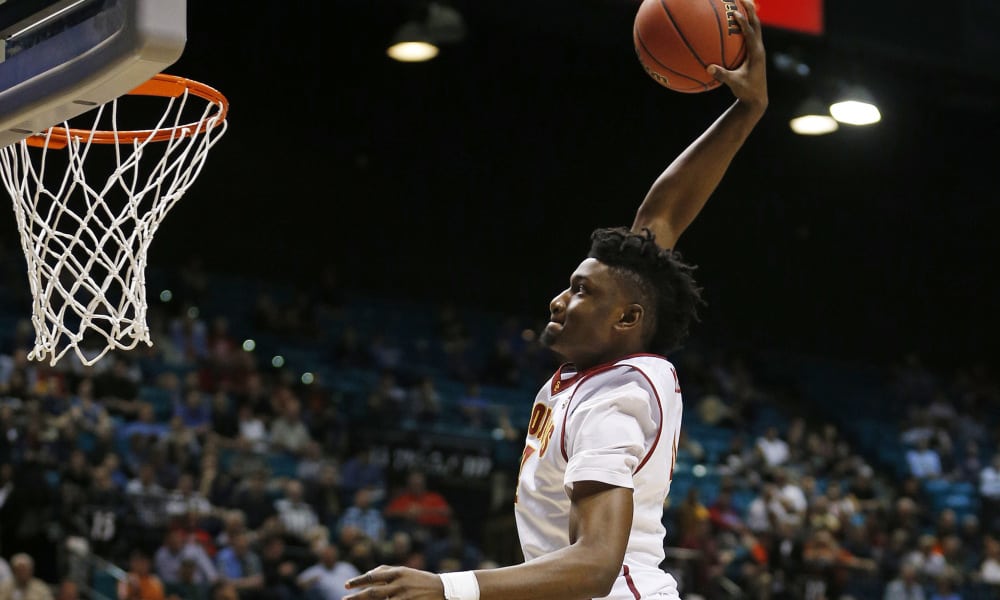 In the frontcourt, Chimezie Metu seems to be more than capable to handle the paint: after a slow first year, he doubled his averages and is showing improvements in every aspect of the game.

Speaking of sophomore, there is a new face in Kansas starting lineup: Lagerald Vick did not just double his averages, he made them five times better. He went from 5 to 25 minutes per game, 2 to 10 points, and went from 0.3 rebounds to 4.5. Bill Self put him in a very small starting five in the last three and the guard answered with over 15 points and 9-of-11 from three. 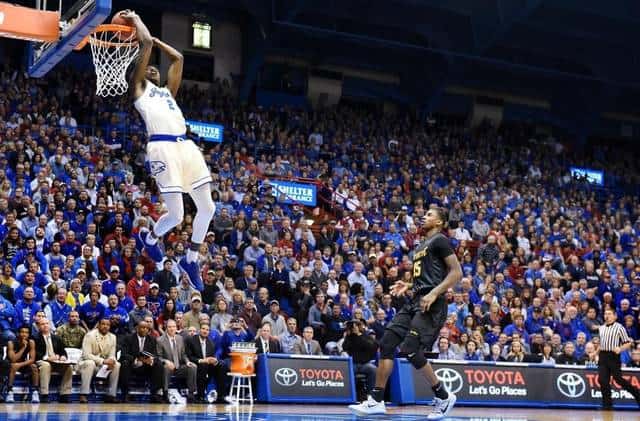 The Jayhaws only loss was in the opener against Indiana, in their 7-game win streak (and counting) showed the usual efficient and fluid offense, although they are connecting on less than 60% of their free throws. The team’s 3-point shooting is good (40.8%) and Frank Mason has been better than expected, shooting 48,4% and averaging 20 points per game.

Ivan Drago, a Mormon in Rome

Eric Mika, BYU center, spent the last two years in Rome for the traditional Mormon mission, and he is now a 22-year-old sophomore. Of his experience in Italy he says that he had to mimic Ivan Drago plenty of times, since he is a perfect lookalike of Dolph Lundgren. Now back in Utah, he married a cheerleader he met in high school and returned to play basketball. And he has been playing quite well, since he is averaging 21 points and 8.5 rebounds while shooting 60% from the floor in less than 25 minutes per game. He set his new career high against USC with 29 points and scored more than 20 points in 5 of the 8 games played by the Cougars. He is 7 feet tall and he is very agile on the floor. Italians should take a note of his name, in case he will be back in Italy.

Gonzaga is rolling and stays undefeated (8-0) by winning against Arizona (69-62) at the Hoophall in Los Angeles. It was a quality win not only because of a good Wildcats squad, but because Arizona is a sort of taboo team for the Bulldogs: six losses in the last six games against them, with Gonzaga’s last win back in 2011. The win was never in question. The Bulldogs seemed quicker and more determined, especially on offense, where Gonzaga plays a fluid style that offers multiple solutions on each possession, but the difference seemed obvious on defense as well. The game MVP was Premek Karnowski, who finished with 18 points, 4 rebounds and 2 blocks and was a constant source of trouble for the Wildcats defense. Josh Perkins helped with 16 points, but it was a team effort, with Nigel William-Goss scoring on a few three-pointers early on to open up the floor, Zach Collins (8 points, 8 rebounds, 2 assists, 2 blocks in 15 minutes) backing up Karnowski and Jordan Matthews sealing the deal with 80 seconds left with a difficult floater.

The Wildcats were never able to properly attack the Bulldogs, a very well coached team capable of switching between man and zone defense without losing in effectiveness. Arizona had a poor shooting night from outside the arc (1-of-8 for the game, the only make came in the last few minutes of the second half), allowing Gonzaga to pack the paint against Arizona’s guards and driving freshmen Kobi Simmons and Lauri Markkannen against the imposing Bulldogs frontcourt (7 blocks). The former had his worst game of the season and finished with 2 points (1-9 from the field), the latter had 2 points in the first half but came alive in the second (12 points) and led a comeback that got Arizona back into the game but was not enough. 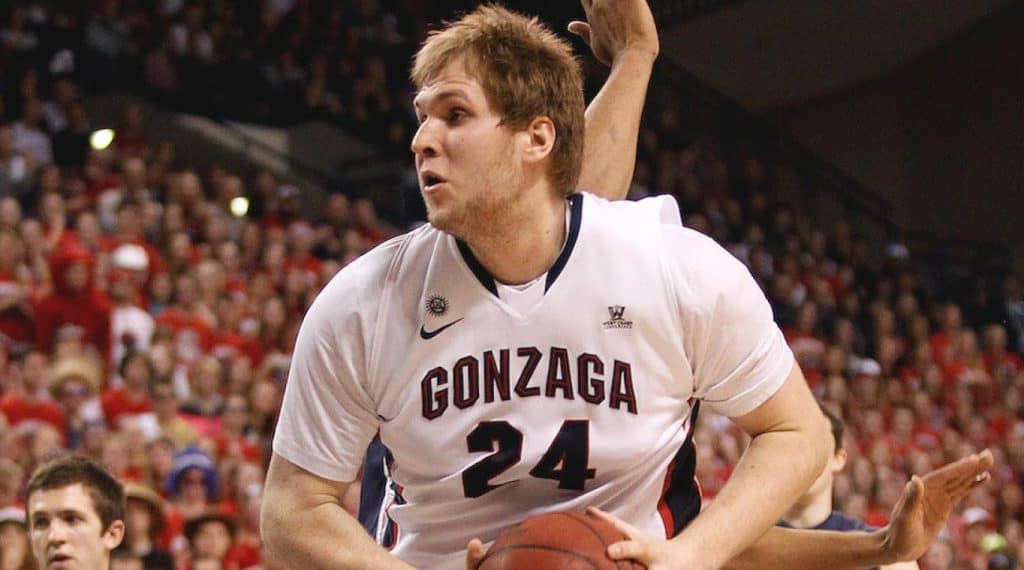 Senior Przemek Karnowski dominated the game, and none of the Wildcats managed to slow him down. He often got the ball deep in the post and finished with lefty half-hooks and runners. Sean Miller decided to double him late in the game, but it looked more like a desperation move than something planned. And he had already abused any defender in the post.

Some teams are having fun, others… not so much. The most eye-popping case is Iowa, a Big Ten team that clearly lost its identity. The loss against Virginia in the ACC-BigTen challenge was acceptable, since the Cavaliers are one of the top teams in the nation. The same could be said for their losses against Memphis and Notre Dame. But then comes the loss against Nebraska Omaha and sure, Tra-Deon Hollins is worth keeping an eye on, but it is also the ultimate warning for coach Fran McCaffery, who must find a running mate for Peter Jok. Besides, the team plays at a very fast pace, but is totally inefficient on defense. 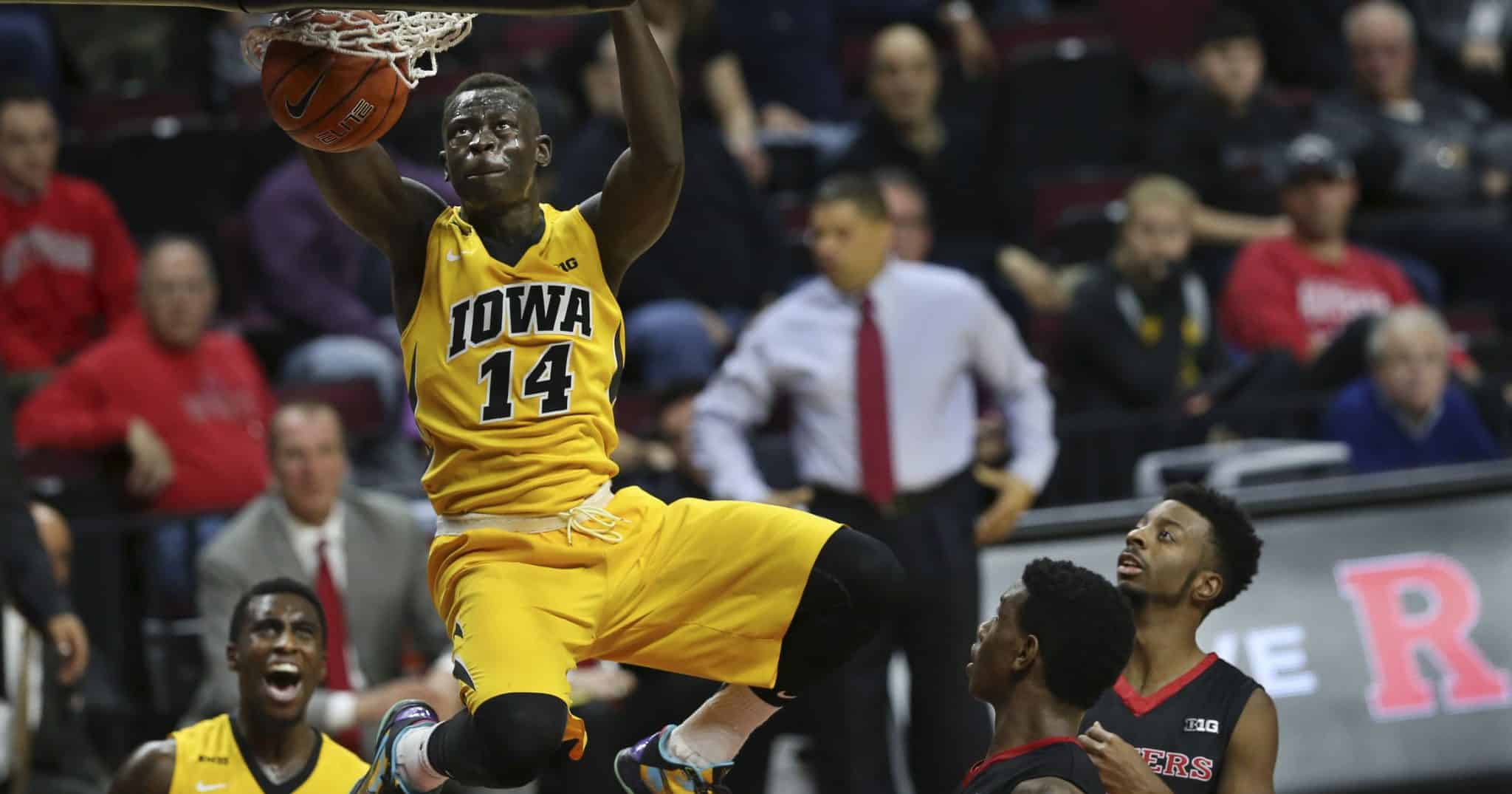 The week also brought a few other surprising results, starting with Pittsburgh winning on the road against Maryland and losing to Duquesne, making for a quick fall off the ranking. And of course San Diego State, losing against Gonzaga, which is to be expected, and then against Loyola Chicago, which is perplexing. 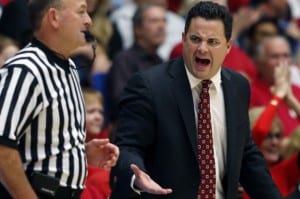 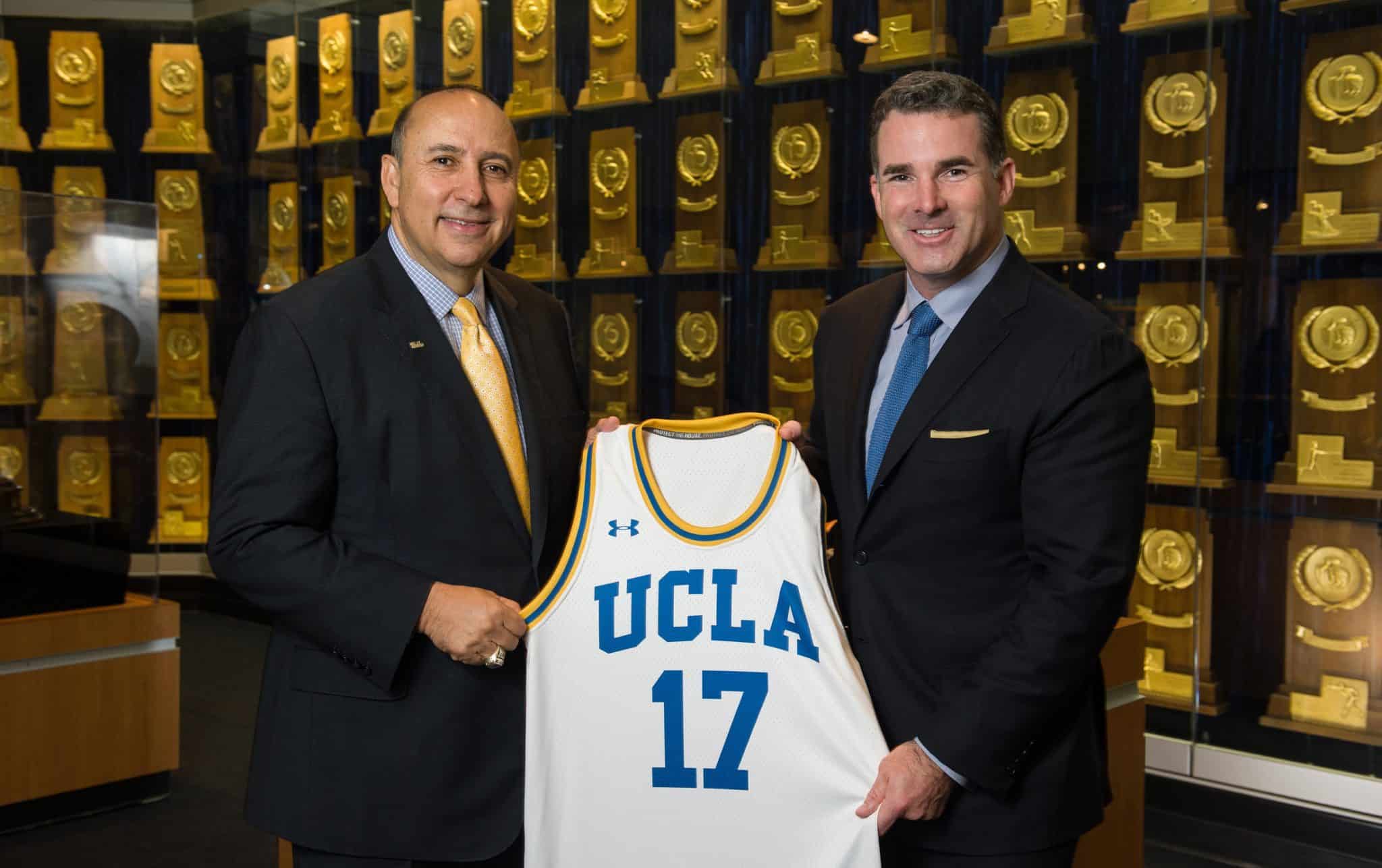