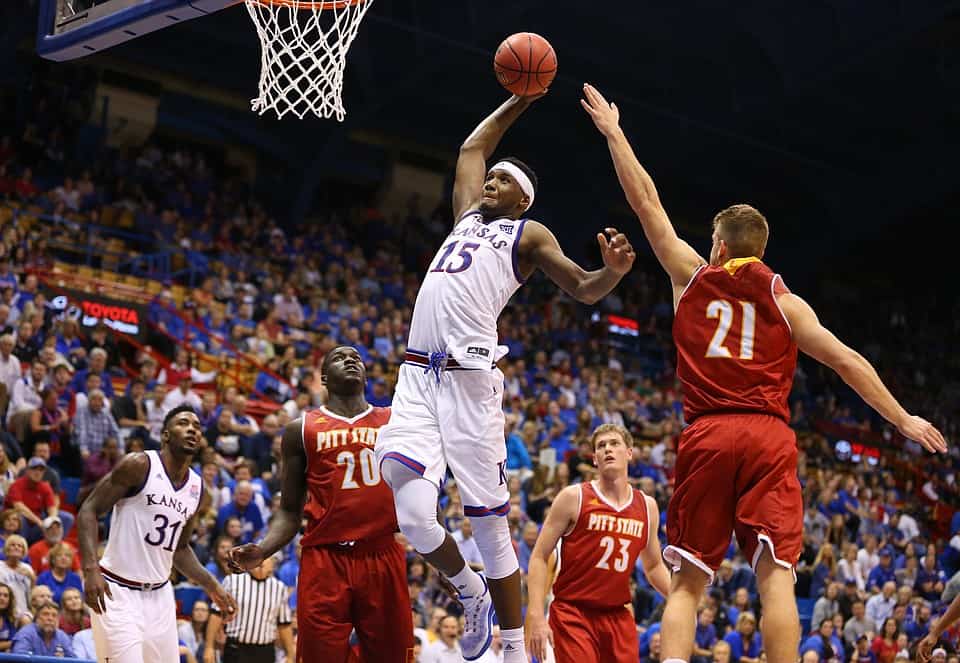 First impressions do count, but they don’t usually tell the whole story. If you want some proof, don’t look further than Buddy Hield and Frank Kaminsky. The Bahamian, in his first season with Oklahoma, averaged 7.8 points per game while shooting 23% from behind the arc, the latter never scored in double figures as a freshman. And we all know who won those Naismith Player of the Year a few seasons later. It happens every year, and the 2015 recruiting class is no exception.

Last year, plenty of freshmen did not live up to expectations: they either could not deal with the pressure of a starting role, or find minutes on the floor, or are still too raw to make the jump that is required to go from high school to college basketball. A few players, on the other hand, had surprisingly positive season and outperformed their recruiting ranking.

It is, of course, important to keep an eye on these sophomores. Some of their predecessors proved that a disappointing first season is not a prelude to a disastrous college career, and one of them might end up winning POY. We ranked them in three different categories, based off the expectations their ranking suggested: “Fail” for those who had a very disappointing season, “Resit” for those who did slightly better and “Passed” for those who had a surprisingly good year.

Espn ranked Isaiah Broscoe 13th in the 2015 recruiting class and he was expected to bring Kentucky’s offence to the next level, except he averaged 9.5 points per game, shot 13.5% from behind the arc and 46% at the free throw line. Not exactly the kind of next-level performance coach Calipari was counting on. He was never a fit in the Wildcats system, and it shows in the team below-100 offensive rating and over-100 defensive rating when he was on the court. He spent the summer working on his shot and he will have to be a reliable threat for a team that needs to open up the floor to allow Malik Monk and De’Aaron Fox to attack the paint.
Carlton Bragg, 24th in the 247sports.com ranking, is another player who could not live up to expectations in Lawrence and made himself known more as a piano-man than on the court.

Unlike Cheick Diallo and Cliff Alexander, his predecessors at Kansas University, who had underwhelming seasons and immediately left, he decided to stay with the Jayhawks and fight for minutes against the likes of Landem Lucas and Udoka Azubuike. He came back to campus about an inch taller and determined to play more than the 9 minutes he averaged last season. Bill Self is preparing for a deep tournament run this season, and he will need Bragg to deliver.

Another top recruit who had a difficult season is Louisville wing Deng Adel. When he had his chance he proved to be still raw, he never adjusted to Pitino’s gameplan and was slowed down by injuries. During the offseason he worked on his shot and his body, showing some progress at the Adidas Nation in Los Angeles and he seems ready to fight for playing time with freshman V.J. King. 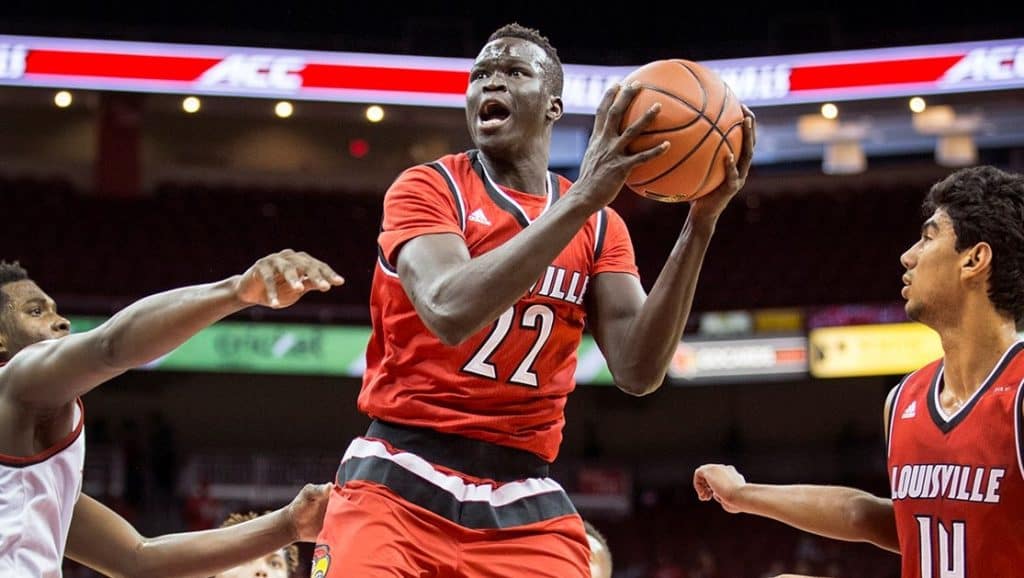 South Carolina was sure to have a go-to guy in P.J. Dozier, the first McDonalds’s All America to play for the Gamecocks since 2000. But his poor shooting (38% from the field, 21% from three) and his turnovers forced coach Frank Martin to pull him from the starting line-up. Dozier himself said he is unhappy with how the season went, but after participating at the Stephen Curry Summer Camp, the Gamecocks might find a more efficient and mature player.
Dupree McBrayer, on the other hand, was a disappointment on and off the court in Minnesota. Towards the end of the season he was suspended, together with teammates Kevin Dorsey and Nate Mason, for uploading a rated-R video on social networks. The suspension came when he had just begun showing some improvement after a negative start of the season. Richard Pitino hopes his 8.7 points per game and 40% three-point shooting in his last 11 games will be a new beginning for the young sophomore. 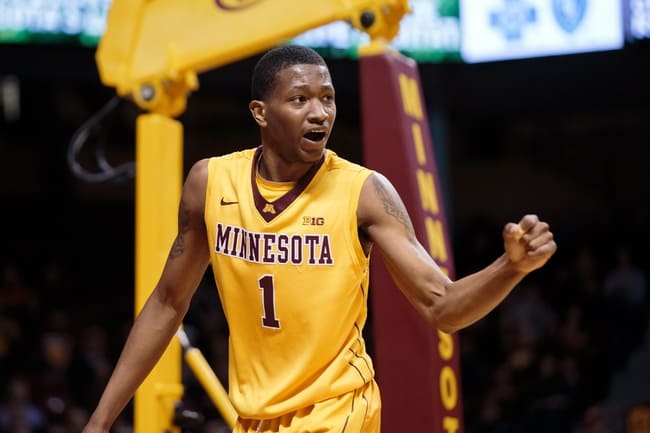 Donovan Mitchell, in his first season at Louisville, made sure people knew he could dunk

but he was inconsistent and was prone to drifting in and out of games. He proved he is a solid defender on the perimeter but Pitino expects him to improve on the other side of the ball this season. Is winning the national title enough to consider a season as a net positive? If we are talking about Jalen Brunson, maybe not. The guard was the most talented player on the Wildcats roster, but he had a limited role in Jay Wright’s team during its title run. He averaged 9.6 points per game and showed he is a reliable shooter from distance (38%), but the presence of Ryan Arcidiacono took the ball and the responsibilities that come with it off of his hands. Arcidiacono will not be around this season, and Brunson will have to be a factor for ‘Nova.

Tacko Fall will never risk to go unnoticed. Being 7-foot-5 certainly helps, and in his first season at UCF he managed to be the best player in the nation in shots from inside the paint (75% for the season). He started playing basketball a couple of years ago, hence his poor understanding of the game, which makes him foul-prone and forced coach Dawkins to limit his playing time. Yet, in just 17 minutes per game, he showed the potential to be a great rim protector, averaging 2.3 blocks, and with one year of experience, he is a candidate for most improved player. 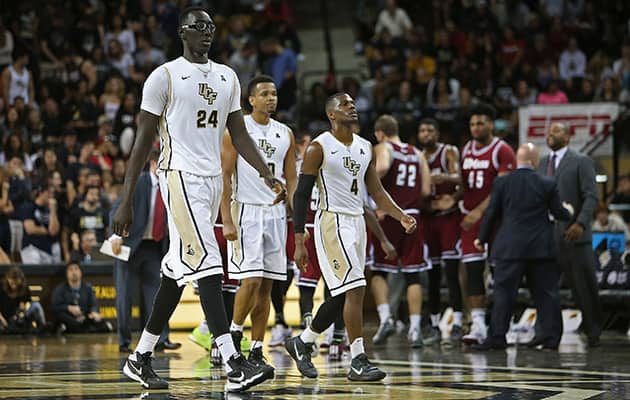 An unexpected contributor to South Carolina surprising season was Chris Silva, a center from Gabon who could be a potential double-double machine thanks to his great nose for offensive rebounds and rim protection. However, he has a lot of work to do to stay on the floor and be helpful to his team, since he averaged 9.4 fouls per game (adjusted per 40 minutes).

Jalen Adams will certainly see more playing time this season at Connecticut. So far, his freshman season will be remembered more for this buzzer beater

than for his being in and out of the coach Kevin Ollie starting five. With Sterling Gibbs, Omar Calhoun and Daniel Hamilton now gone, Adams will be the leader in Uconn’s backcourt, and we might see a few more buzzer beaters.

There’s coming in with high expectations, and there’s Bill Walton comparing Chimezie Metu to Hakeem Olajuwon. The USC center was the seventh man in the Trojans rotation but showed potential, especially on defence, and this alone makes him one of the most interesting names in future drafts, if only because skilled seven-footers will always be in high demand in the Nba. He showcased his skills in the Pac-12 against the Utah Utes, when he limited the best center in the nation, Jacob Poeltl. 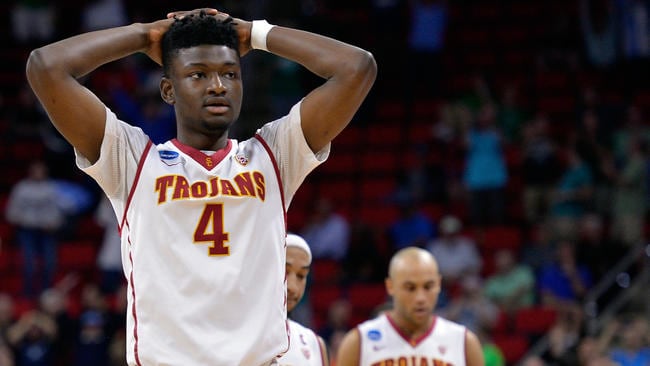 Derek Ogbeide is another center who showed some promise when he found minutes at Georgia. Free throws and experience are serious concerns and costed him some playing time, but he was effective on the boards and altering shots (13% Reb% and 6% Blk% – per KenPom).
Cameron Johnson might become one of the best three-point shooters in the nation. The Pittsburgh redshirt sophomore shot 37.5% from behind the arc on 2.5 shots and roughly 11 minutes per game. This season, with James Robinson and Sterling Smith gone, he will be one of the main pieces of an offence that, with coach Stallings, will rely a lot more on outside shooting.
A.G. Anunoby is the player that surprised the most, showing huge potential in limited playing time. He averaged 7.7 minutes in the first half of the season, showcasing his skills as a dancer rather than basketball player.

In January, though, an injury sidelined James Blackmon Jr for the rest of the season, and O.G. had the chance to show his athleticism and potential, as the Spartans can attest:

Anunoby did not feel any pressure in an increased role (16.6 minutes per game) nor shied away from the challenge and proved to coach Tom Crean he deserved a spot in the rotation by averaging 6.4 points while shooting 61% from the field and 44.8% from distance, 1.9 steals per game and posting huge defensive performances, including in the Hoosiers win against Kentucky in the Sweet 16.